Have you ever tried Thai iced tea? It’s like chai tea in that both beverages are made with black tea and spices like clove and cardamom, but Thai tea has a unique orange color and a creamy base, which I get from using coconut milk.

Do you know there are many black tea benefits? In many Asian countries, black tea is consumed daily, in both hot and cold forms. My Thai iced tea, which is made with black tea, orange blossom tea, antioxidant spices and coconut milk, is good for you because it contains healthy fats, can give you energy and may even help to reduce inflammation. (1) Plus, it’s super satisfying and can serve as a nice treat or pick-me-up after a long day.

In Thailand, Thai iced tea is often served at coffee shops, street carts and restaurants. Traditionally, the tea is made with black tea, condensed milk and crushed ice. Sometimes it’s spiced with star anise, which has a sweet, licorice-like flavor, and orange blossom water, but over the years, Thai iced tea recipes have been influenced by Western culture and have begun to incorporate sweeteners and even food coloring to give it that vibrant orange color that consumers have come to expect.

In my Thai iced tea recipe, I’m taking it back to the traditional way of preparing the beverage, in that it’s made with natural ingredients and no artificial sweeteners. I also added my own little twist by using coconut milk as the creamer instead of condensed milk. Why? Because coconut milk is loaded with healthy fats, like lauric acid, and it’s a great option for anyone who suffers from food allergy symptoms, as it’s free from daily, soy, nuts and grains. Plus, coconut milk has a delicious, creamy and rich flavor that goes perfectly with the spices used to make Thai iced tea. In addition to the black tea and coconut milk used in this recipe, I also use star anise, whole cloves, cardamom, vanilla extract and orange blossom tea (or orange zest).

It’s actually the star anise and cloves that give Thai iced tea its signature orange color, although commercial and Westernized versions of the tea are made with artificial food coloring. This more natural recipe goes back to the traditional way of preparing the beverage. If you want your tea to be a more vibrant orange, try adding a tablespoon of cold-pressed carrot juice to each cup.

When it comes to the amount of caffeine in Thai iced tea, the number varies. The caffeine content of black tea is considered moderate, with about 42 milligrams of caffeine in eight ounces. If you use caffeinated orange blossom tea bags to make your tea, you’re adding more caffeine. But you can find both black tea and orange blossom tea in decaffeinated forms if you’re concerned about having too much caffeine.

I know you are going to love this Thai iced tea recipe because it’s rich in flavor and will give you a nice pick-me-up too. Plus, it only takes about 15 minutes to prepare. So give it a try and let me know what you think!

One serving of my Thai iced tea made using this recipe contains roughly the following: (2, 3, 4, 5) 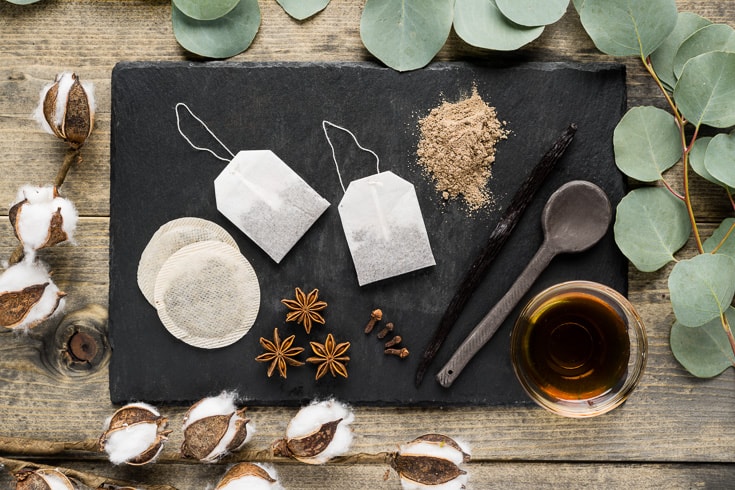 How to Make Thai Iced Tea

When I’m making Thai iced tea for myself and my wife, Chelsea, I like to use a large cup or pitcher with a slanted edge, which makes it easy to pour, and I can store any extra in the fridge. Start by adding 1 cup of hot, boiled water, 2 organic black tea bags and 2 organic orange blossom tea bags (or 1 teaspoon of orange zest) to your pitcher. If you want to add a little extra sweetness, add in 1 tablespoon of maple syrup too. Then add in 4 whole cloves, 2 star anise, ½ teaspoon of vanilla extract and 1 teaspoon of cardamom.

Stir the ingredients and let your tea steep for about 8–10 minutes. Next, I pour my tea through a mesh strainer or use a slotted spoon to take out the tea bags, star anise and cloves. Once your tea has been strained, fill two tall glasses to the brim with ice … and pour your tea evenly between the two. Your final step is to top each glass with coconut milk and give your tea a final stir.

And that’s it. Your Thai iced tea is ready to enjoy!