If you haven’t put your vape pen aside yet, the sixth death believed to be related to the new, mysterious vaping illness, should inspire you to.

So far, more than 450 cases of this lung illness have been reported in 33 states and the Virgin Islands. It typically hits otherwise young, healthy people—a September 6 report in the New England Journal of Medicine that did a deep analysis of 53 case patients found 83 percent of them to be male, with a median age of 19. A full 94 percent were hospitalized; some even required mechanical ventilation.

Symptoms are thought to include any or a combination of these: shortness of breath, chest pain, cough, as well as nausea, vomiting, diarrhea, abdominal pain, and sometimes fever.

The exact cause hasn’t yet been found

Experts suspected vaping when otherwise healthy young people came in with illnesses that looked like lung infections—and had similar very serious consequences—but tests didn’t turn up any infectious agents. So they think there’s an irritant being inhaled that causes inflammation in the lungs. But what has everyone rattled is that nobody’s been able to lock down exactly what the culprit is. There are theories that certain oils in the chemicals get into the lungs, where your body thinks they are invaders and mounts this inflammatory response. But no one seller and no one compound has been IDd.

But THC-containing liquids are being investigated

Attention has turned to THC (the component of cannabis that gets you high), with experts suggesting that something added to THC-containing vape liquids may be to blame (additives to batches in certain states may help explain why these illnesses seem to be breaking out in clusters). Bootleg products are specifically under the microscope as causes, since the primary e-cig manufacturers haven’t changed their ingredients on a large scale, Scott Gottlieb, M.D., the former commissioner of the Food and Drug Administration, told The New York Times. The CDC advises against buying bootleg vape liquids and also against modifying e-cigarettes in any way. 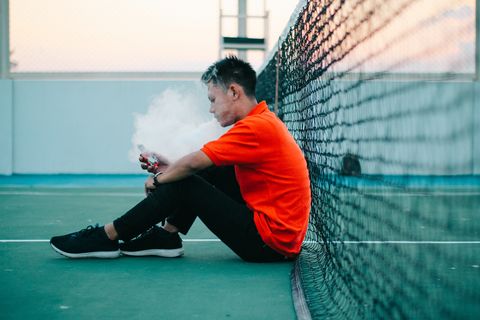 Panicking is generally not a great response to anything, but we’d say it’s as good a moment as any to stop vaping, even if you don’t vape THC, and even if you buy brand-name products. Today, President Donald Trump added his voice to the mix, suggesting an intention to clear the market of non-tobacco-flavored e-cigarettes.

Contrarian views say that the “stop vaping” message is overblown; one Slate report said it’s “kind of like responding to a string of bad car accidents by suggesting that we better all start avoiding cars in response, rather than considering what specific factors might have contributed to that specific set of crashes.”

Which is an interesting intellectual point, but keep in mind that starting to vape (if you weren’t smoking cigarettes before), isn’t suspected to boost your health. The fact that e-cigarette use jumped 78 percent in high school students between 2017 and 2018—a group unlikely to be using them as a way to quit smoking cigarettes—prompted the Surgeon General to call it an epidemic. Nicotine addiction goes up, and doctors and scientists repeatedly caution that other chemicals are likely inhaled along with nicotine, and they may have consequences that haven’t come to the forefront yet.

“Don’t vape” is easy to say. But the issue, like so many issues, is more complex than that, and the action much harder. (And smoking marijuana or cigarettes the old fashioned way isn’t the answer, either, by the way.) Experts recommend having something else to do with your hands is good—fiddle with a rubber band, hold a bottle of water (and drink it when you feel fidgety). And if you’ve been vaping nicotine, talk to a doctor about how to wean yourself off that drug; there are a number of ways to do it, including medications, patches and gum.

via Vaping-Related Lung Illness: What to Know Now