Arnold Schwarzenegger is an outspoken activist and brand founder and pitchman. Before that, he was the governor of California. Before that, he was one of the most iconic action stars in Hollywood. But the most successful, most remarkable version of Arnold might be the original: The bodybuilder who broke the mold.

The Austrian Oak was a 7-time Mr. Olympia, who built up his popularity through his physique and an unforgettable appearance in the the documentary Pumping Iron. Now, the Arnold Classic is one of the biggest events on the bodybuilding—and general strength and fitness overall.

If anyone knows about building your body, it’s Arnold. If you really want to maximize your workouts, you’ll stick to these training guidelines from the Master of Muscle—and check out the MH profile to learn about everything that went into prepping his physique at 72 years old for his role in the upcoming Terminator: Dark Fate.

Kick off any serious training regimen by taking pictures of yourself from the front, side, and back. “This way, you can always check back to find out what kind of progress you have made,” Schwarzenegger writes in his book The Encyclopedia of Bodybuilding.

If you’ve always wanted big, powerful arms, you’ll be tempted to do biceps curls. Skip them early on and focus on multi-joint moves like bench presses and squats. “Once you have gained 15 pounds or more of muscle mass . . .” Schwarzenegger says, “you are ready to begin adding a great variety of exercises to your routine.”

The “pump” is blood rushing to the muscle your training, causing the muscle to literally swell inside. And if you’re aiming to pack on muscle, it’s something you want, says Arnold. Focus on getting that feeling in every workout, even if you’re struggling. “You can still get the pump to come if you focus and concentrate hard enough,” he says. 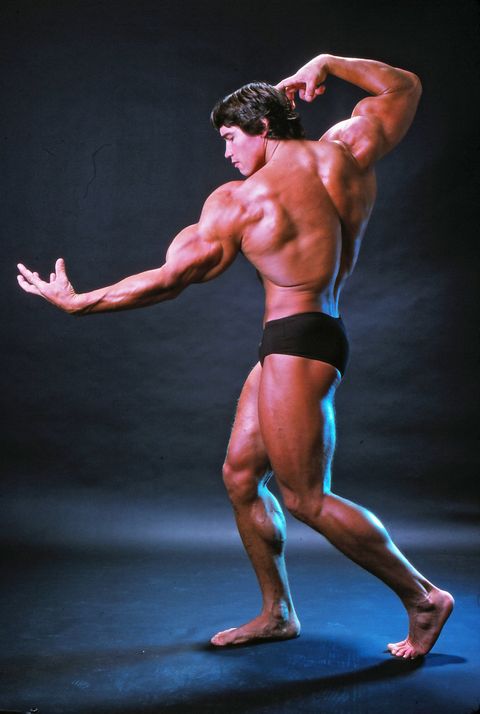 Plenty of guys get geeked to do a single rep at their heaviest weight but that’s not the Arnold way. Instead, do 8 to 12 reps every set. Why? Powerlifters.

“No matter how many fibers the weightlifter involves in one maximal lift, he still uses fewer than he would if he used less weight and did more repetitions,” Schwarzenegger says.

In his heyday, Arnold built around free weights, but as he’s gotten older, he’s fallen in love with machines. “The machines that you have today, I wish that I could have used them in addition to what I did,” he says. Don’t be afraid to integrate, say, a shoulder lateral raise machine or a preacher biceps curl machine—just hit those machines at the end, after you’ve gotten 2 free weight exercises.

Get at least one day a week in which you don’t touch a single weight—and stay away from all challenging activities on that day, too. “If you’re running marathons Sunday, you are probably not going to have much energy when you go back to the gym on Monday,” he says.