If you’ve ever spent an evening overindulging in alcohol, chances are you’ve experienced the group of unpleasant symptoms known as a hangover. Headaches, nausea, vertigo and abdominal pain are just a few of the troublesome symptoms associated with consuming alcohol to excess. When you awaken, your first thoughts may center around how to get rid of a hangover and if there is a magic cure!

There is no magic cure, but there are natural hangover remedies that will help lessen some of the symptoms. The challenge with finding a cure for a hangover is that there are so many underlying processes affected by alcohol. Dehydration, low blood sugar and exhaustion stem from separate issues. Dehydration comes from excess urine production; the alcohol causes low blood sugar; and a lack of food and exhaustion is brought on by poor sleep quality.

That’s why multiple natural hangover remedies must be employed. Of course, the best way to never have to wonder how to get rid of a hangover is to never drink alcohol in excess. Binge drinking, common on college campuses, can lead not only to hangovers but to a serious, life-threatening condition known as alcohol poisoning. If you ever see anyone experience a loss of consciousness or turn blue after drinking, call 911 immediately.

What Is a Hangover?

A hangover is a group of symptoms that develop after drinking too much alcohol. The more alcohol you consume, the more likely you are to experience a hangover. While symptoms typically abate within 12 hours, they can last up to 24 hours and finding out how to get rid of a hangover becomes more and more critical.

Everyone experiences a hangover differently. Symptoms depend on your personal chemistry, the amount of alcohol consumed, food in your system and other factors. Each person is different and must learn personal symptoms and strategies in how to get rid of a hangover. Common symptoms of a hangover include:

Of course, the basic cause of a hangover is drinking too much, but according to the Mayo Clinic, there are other factors that also play a role: (2)

Dangers of a Hangover

Excessive alcohol consumption, particularly on a regular basis, can lead to alcoholism, liver disease and a wide range of other severe health conditions. However, the real danger is when symptoms are mistaken for being drunk or hungover when they are really a sign of a life-threatening condition called alcohol poisoning.

Signs of alcohol poisoning include: (3)

If you suspect alcohol poisoning, call 911 immediately. Time is of the essence.

In addition, hangovers often cause sufferers to miss work and school and not perform optimally. As poor balance and vertigo are common symptoms while blood alcohol levels are dropping, falls and accidents are also a danger.

Quick Tips on How to Get Rid of a Hangover

Physicians typically don’t treat hangovers. However, in cities across the nation “hangover clinics” and even buses are popping up. In these clinics, technicians insert an IV and provide hydration and vitamin therapy to ease the symptoms of a hangover. While a quick fix for a hangover may be tempting, it is important to note that this type of treatment is controversial and may be dangerous. In short, it may not be the best solution if you’re wondering how to get rid of a hangover safely. (4)

How to Get Rid of a Hangover: 9 Home Remedies

When considering how to get rid of a hangover, it is important to address all of the underlying issues causing the symptoms. Dehydration, low blood sugar, exhaustion and digestive upset all require different treatments. Use the following hangover home remedies in concert with one another for best results.

2. Coconut Water. Dehydration from excessive urine production and vomiting requires drinking plenty of liquids. There is research showing that coconut water is easier to consume than plain water or sports drinks and is not associated with nausea or stomach upset. Coconut water is high in electrolytes, including potassium, which your body sorely needs after overindulging in alcoholic beverages. (5)

3. Ginger Tea. To settle the stomach and stave off vomiting, sip ginger root tea sweetened with just a touch of raw honey. In addition to helping with digestive upset, it can help to stabilize blood sugar levels, which are adversely affected by alcohol consumption and poor eating. (6)

4. Eggs. Eating eggs for breakfast may just help your body release the after-effects of the alcohol that lurk in your system. In fact, eggs contain L-cysteine, an amino acid that is responsible for breaking down toxins and releasing them. Of course, they are also a great source of protein and will help you rebuild energy reserves. (7)

5. Complex Carbohydrates. As drinking alcohol lowers blood sugar in many people, boosting energy with healthy carbs may help to relieve hangover symptoms. Sweet potatoes are a perfect choice; they are loaded with beta-carotene, potassium, vitamin A, vitamin C and vitamin B6. For brunch, when nursing a hangover have a couple of eggs alongside this nutrient dense and satisfying Sweet Potato Hash. 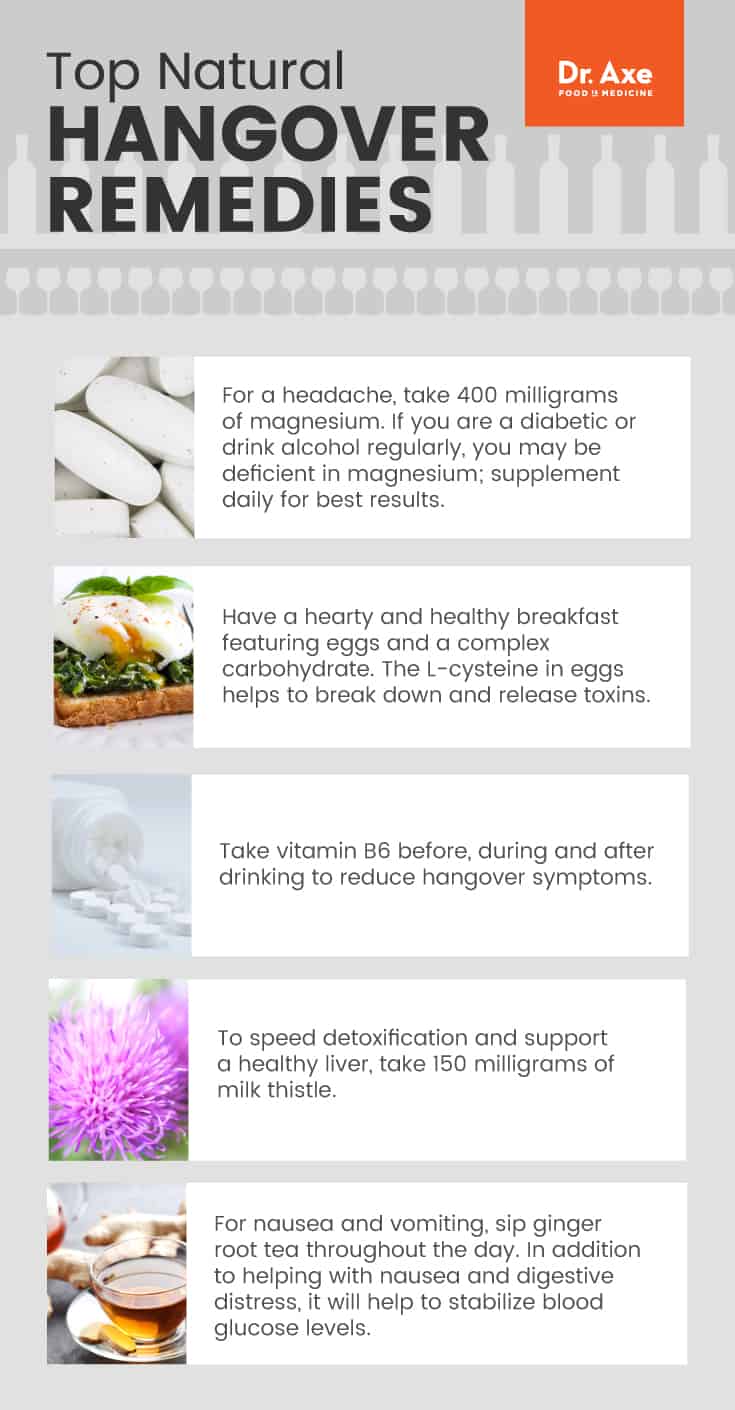 6. Vitamin B6. Decades ago a study found that taking 1,200 milligrams of vitamin B6 before, during and after drinking is associated with fewer hangover symptoms and today vitamin B6 is still associated with being an effective treatment. (8)

However, high doses of vitamin B6 can interact with prescription medications including antidepressants, antibiotics, certain asthma drugs, medications for high blood pressure or tuberculosis and chemotherapy drugs. Before taking vitamin B6, speak to your doctor if you take any of these medications.

7. Bone Broth. For an upset stomach and to help restore electrolyte balances, sipping on bone broth can help to relieve hangover symptoms. A bonus is that it contains minerals that are easy to absorb. Select a high-quality bone broth from grass-fed beef or make your own in the days before you know you may overindulge on alcohol.

8. Milk Thistle. Used for thousands of years because of its ability to draw out toxins and support of liver health, milk thistle can relieve common symptoms including indigestion and digestive distress while supporting healthy liver function, according to researchers. Take up to 150 milligrams when hungover. To support healthy liver function take 50 to 100 milligrams daily. (9, 10)

9. Siberian Ginseng. For nausea, stomach pain, vomiting and tiredness, take 500 milligrams of Siberian ginseng. According to a study published in the journal Human Psychopharmacology, Siberian ginseng is shown to provide significant improvement of some hangover symptoms. As ginseng can interact with certain medications, if you are taking drugs for diabetes or depression or a blood thinner such as warfarin, do not take ginseng. (11)

via How to Get Rid of a Hangover: 9 Home Remedies