Curious about the next “it” beverage? Look no further: It’s called matcha green tea, and the health benefits are astounding!

Heralded by top nutritionists, researchers and health-conscious celebrities alike, matcha is not your typical green tea. This high-grade, finely ground, concentrated green tea has been traditionally used in Japanese tea ceremonies for hundreds of years.

As a fat-burner and cancer-fighter, matcha leaves other teas in its dust. In fact, numerous studies have shown that certain chemical compounds in matcha may help induce cancer cell death, neutralize harmful free radicals and enhance your body’s natural detoxification systems.

Matcha is a concentrated powdered form of green tea that has been used for centuries in China and Japan. In fact, the term “matcha” and its pronunciation (maa-chuh) are derived from Japanese words meaning “ground” and “tea.”

Matcha is made from the leaves of the tea plant Camellia sinensis, an evergreen shrub of the Theaceae family. All tea comes from this plant, but the variations in color and taste are the result of differences in processing.

The tea plants that are specifically grown and used to make matcha are typically shaded for two weeks to increase chlorophyll levels before the leaves are picked. After harvest, the green tea leaves are steamed, dried and ground into a fine powder.

Unlike other types of tea, matcha contains the entire tea leaves, providing a more concentrated source of nutrients. It also has a strong, distinct flavor, which many compare to spinach or wheat grass.

The secret behind matcha’s super strength is found in its polyphenolcompounds called catechins, which are a type of antioxidant found in superfoods like green tea, cocoa and apples.

Valued for being more catechin-dense than most foods, the health benefits of matcha generally arrive for those who regularly drink it. Potential benefits range from improved heart health to lower blood sugar levels, increased weight loss and beyond.

Research has shown that green tea consumption could potentially reduce the risk of cancer. Some of the specific cancers that matcha has been shown to benefit include:

Several promising studies have found that matcha tea benefits your waistline and could help promote and sustain long-lasting weight loss.

For example, one study in the American Journal of Clinical Nutrition found that drinking a tea high in catechins for 12 weeks led to significant reductions in fat mass, BMI, body weight and waist circumference compared to a control group.

Similarly, a review out of the Netherlands reported that the catechins found in green tea and matcha could help reduce body weight and maintain weight loss.

Other research has found that matcha could increase metabolism and boost fat-burning to help enhance long-term weight loss as well.

Clinical tests suggest that matcha can help speed up muscle recovery in athletes whose focus is high-intensity workouts, like burst training.

It has also been shown to reverse cellular damage caused by oxidative stress, which could help prevent damage to the muscles and tissues.

An animal model published in Basic and Clinical Pharmacology and Toxicology found that administering EGCG to mice with chronic fatigue syndrome helped reduce markers of oxidative stress and inflammation caused by exercise.

According to a paper published by Harvard Medical School, green tea is one of the best food sources of a group of antioxidants known as catechins.

Catechins are thought to be even more powerful than both vitamins C and E in stopping oxidative damage to the cells. Antioxidants like catechins play a key role in health and disease, with studies showing that they could help protect against chronic conditions like heart disease, diabetes and cancer.

Research also shows that matcha is significantly higher in catechins than other types of tea, such as green tea. 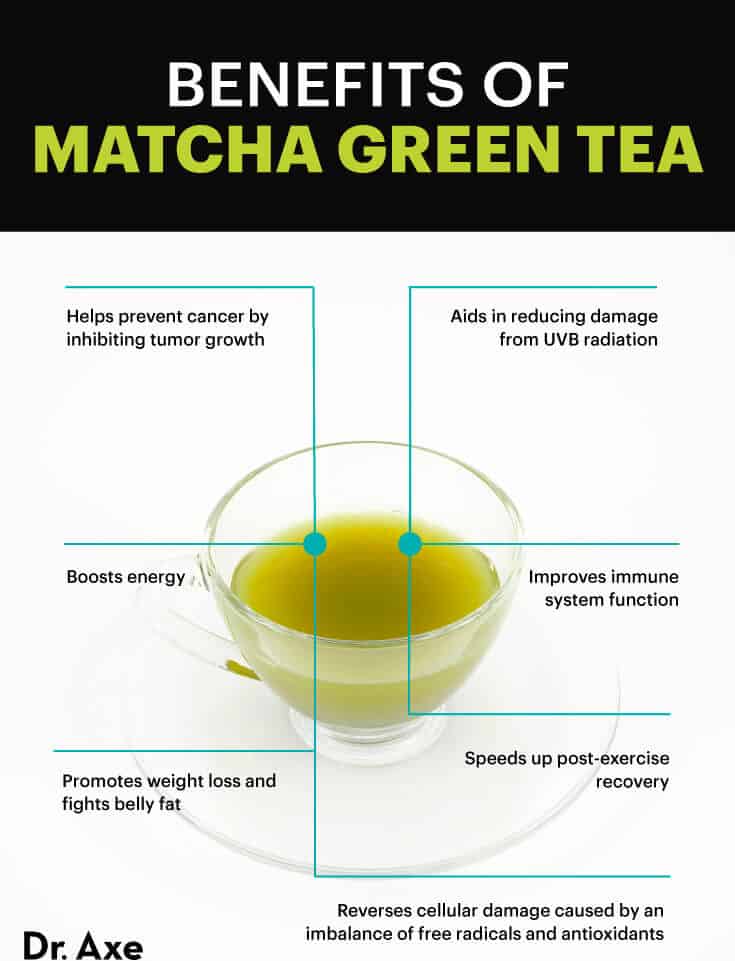 5. High Levels of L-Theanine for an Alert Calm

Matcha is said to induce a feeling of “alert calm,” thanks to the powerful combination of L-theanine and caffeine.

L-theanine is an amino acid found naturally in teas from the Camellia sinensis plant. By drinking matcha green tea, you can increase levels of L-theanine and promote alpha waves, which lead to a state of relaxed alertness.

L-theanine also helps to increase levels of dopamine and GABA in the brain, which could benefit conditions like anxiety.

Due to the conditions in which it is grown, it’s estimated that matcha green tea may contain up to five times as much L-theanine as regular green tea.

High in antioxidants and catechins, some studies show that green tea may help reduce the risk of heart problems.

Other studies have found that green tea consumption could help lowercholesterol levels and reduce blood pressure to protect against heart disease.

Making a few healthy changes to your diet and lifestyle is one of the best ways to prevent type 2 diabetes, and some research suggests that adding matcha to your routine may be especially beneficial.

For instance, one study published in the Annals of Internal Medicine foundthat consumption of green tea was associated with a lower risk of developing diabetes after adjusting for age, sex, body mass index and other risk factors.

Another study published in the American Journal of Clinical Nutrition found that green tea consumption decreased blood sugar levels and improved long-term blood sugar control. Not only that, but green tea also led to a significant reduction in insulin levels as well.

Related: Your Diabetic Diet Plan (A Guide for What to Eat with Diabetes)

Matcha’s rich green color is the result of its high chlorophyll levels. Chlorophyll is a type of plant pigment responsible for the absorption of light in the process of photosynthesis, which creates energy.

The fact that matcha is carefully shade-grown makes it significantly richer in chlorophyll compared to other teas.

In addition to giving matcha its signature vibrant hue, cholorophyll also aidsin detoxification and can help promote the elimination of unwanted toxins, chemicals and heavy metals from the body.

For this reason, consuming a daily cup of matcha is an easy way to boost your intake of cholorophyll and  support your body’s natural ability to detoxify itself.

Thanks to its growing popularity, there are many options for where to buy matcha, ranging from local grocery stores to health food stores, coffee shops and online retailers.

However, not all matcha is created equal. Here are a few quick tips to help you get the most bang for your buck and pick the best matcha powder possible:

The most straightforward and common way to use matcha powder is to make tea, but matcha green tea is traditionally made in a very unique and specific fashion.

Directions can vary, but here is one easy method for how to prepare matcha tea properly:

Besides making tea, this versatile ingredient can also be used to make other foods such as matcha ice cream, smoothie bowls and baked goods like cake, brownies or cookies.

Looking for more ideas? These all include a hearty dose of health-boosting matcha green tea. Try one of these seriously delicious recipes:

Many people wonder: Does matcha have caffeine? One of the biggest differences between matcha vs. green tea is its caffeine content.

That being said, matcha green tea powder may not be a great choice if you are sensitive to the effects of caffeine. Although it gives more of a balanced, alert feeling due to the high levels of calming L-theanine, it’s best to keep intake in moderation and avoid around bedtime if you have any difficulty sleeping.

Because of its caffeine content, it’s also not recommended for children or those who are pregnant or breastfeeding.

Keep in mind that drinking green tea on an empty stomach can lead to stomach pain and nausea. It’s best to drink it after a meal, especially if you have any issues with peptic ulcers or acid reflux.

If you have iron-deficiency anemia, it’s important to note that green tea consumption can cause a decrease in the absorption of iron from food.

Unfortunately, lead contamination is a common concern with matcha and buying organic doesn’t always guarantee purity. Buying a Japanese matcha rather than Chinese matcha can help decrease the risk of lead exposure, but it’s still best to stick to just one cup per day.

Finally, green tea can interact with some prescription drugs, so check with your doctor before consuming matcha if you take medications or have any ongoing health concerns.

via Matcha Green Tea Benefits, How to Make, and Side Effects