Fast-food chains, like the rest of us, are struggling through the global pandemic. Sit-down dining options are still limited in many states, drive-thru lines are serpentine, and employees fear their safety.

How are fast-food chains responding to these challenges?

This week Starbucks announced their new Impossible Breakfast Sandwich, which joins the Impossible Croissan’wich at Burger King (debuted in early 2020) and the Dunkin’ Beyond Sausage Sandwich (the OG plant-based breakfast sammich, which came out late October 2019).

With each new announcement of their plant-based offerings, the highly paid marketing departments at these global chains adorn their product with a sparkly health halo.

Dunkin’ says of their sandwich helps “deliver the nutritional and environmental benefits of plant-based protein.” Burger King advertises that their version is “sausage made from plants” and sets a picture of the sandwich to a backdrop of bright “eco” green on their drive-thru menus. And Starbucks advertises its plant-based breakfast sandwich as part of a new way to start your day.

And because I was stir-crazy and always in need of fresh ideas to entertain him, I brought along my toddler-aged son.

This was going to be fun, right?

It sounds so very … Starbucks.

After my toddler and I waited in a lengthy queue that passed a series of increasingly aromatic dumpsters, I picked up our sandwich, parked, and found a table at an adjacent Five Guys. There we unwrapped our first plant-based breakfast sandwich (and my son’s first ever!) in the morning light.

Starbucks’ Impossible offering contains 430 calories, 22 grams of protein, 36 grams of carbohydrates (three of which are fiber and four of which are sugar), and 23 grams of fat.

But prepare yourself for one heck of an ingredients list. Take a deep breath with me now…

So, in summary, it’s a soy patty topped with an egg mixture patty, cheese, and a bun with sesame seeds, which makes it artisanal?

Being the incredible father that I am, I let my son take the first bite.

I was hungry, so I sacrificed myself. The sandwich was indeed blacktop-in-the-sun hot, but after searing at least the first layer of my tongue, some interesting flavors did emerge.

There was some subtle creaminess to the eggs. There was some nuttiness from the sesame seeds, which appeared folded into the dough instead of speckled atop like a burger bun. There was a little sharpness to the cheese, but more like a butter knife than a Zwilling J.A. Henckels Bob Kramer Carbon Steel Chef’s Knife.

But from the Impossible patty? Nothing. The flavor was non-existent and the texture was … how can I put this best? … pre-chewed.

The sandwich had cooled, and after feeding my son a few bites of the roll, I pulled off a piece of the “meat” for him.

He shrugged his shoulders.

My local BK, by comparison, was completely deserted. I breezed through the drive-thru, selected one of many parking spots, and climbed into the backseat with my son. He squinted at me, skeptical in regards to what I was holding.

“Do you want to try another plant-based breakfast sandwich?”

In terms of numbers, Burger King’s Impossible Croissan’wich has 490 calories, 21 grams of protein, 35 grams of carbohydrates (1 gram of fiber, 5 grams of sugar), and 30 grams of fat.

Compared to Starbucks’ faux-tein sandwich you’re looking at about the same amount of protein for more calories, less fiber, and more sugar.

And ingredients-wise? No clue. I asked a public relations person at Burger King for an ingredients list, but they said it wasn’t available. There’s no sign of one on their website either.

“Novelty” fast-food items can get away with this kind of thing sometimes, and that’s a shame, but, BK, if you want to add the ingredients list to this section, holler at me, because people miiiiight what to know exactly what they’re putting into their bodies with this stuff.

Take Starbucks’ Impossible Breakfast Sandwich, exchange the roll for a strangely sweet croissant, swap in a processed cheese single, improve the egg quality ever so slightly, and you have the Burger King Impossible Croissan’wich.

Oh, and also deliver onto the Impossible patty the fiery wrath of 1,000 suns of Hell because, for whatever reason, this thing is spicy.

Actually, I know the reason. On my drive from Starbucks to Burger King, I noticed a weird, slick film had clung to my mouth. It tasted the way that Saran wrap smells.

And it worked because all I could taste after allowing this supersoft sandwich to slide down my gullet was heat.

Before the spice kicked in, I asked my son what he thought of the sandwich.

“Not good,” he said, reaching for his sippy cup.

I kid you not, this is how he responded: “Not real.”

And then, between coughs and saying “spicy,” he asked me what we were doing “after this.”

The Dunkin’ Beyond Sausage Sandwich

My son had moved from slightly annoyed to cantankerous.

“Where’s home?” he asked. He also kept instructing me to “no pay.”

“Why, don’t you feel like you’re getting a good value for your plant-based breakfast sandwich selections?” I inquired. (Each of these sandwiches cost roughly $4.)

“Well too bad,” I said, pulling up to the last drive-thru pay window. 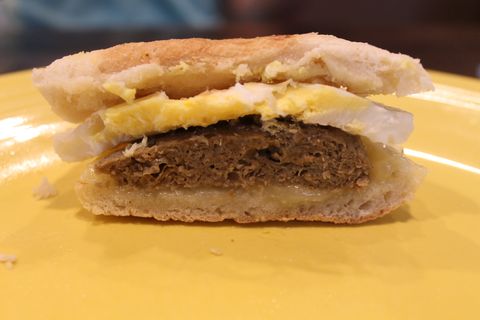 It’s higher in protein than the Starbucks and Burger King sandwiches, but it’s also higher in calories and empty carbs too.

The ingredients list, which Dunkin’ does publish, is long like the Starbucks one and includes such appetite-whetting items as “Mung Bean Protein,” “Pyridoxine Hydrochloride,” and, everyone’s favorite, “Cyanocobalamin.”

Fatigued and suffering from greasy underlips, my son and I returned home to try our plant-based Dunkin’ option. We even shared half with my wife.

None of us could make it through more than a bite. While I enjoyed the hints of herbs in the sausage patty itself, the muffin was wet and gummy, the egg sweaty, and the cheese a moistened salty spackling paste.

One last time I asked my son: “What do you think?”

This time all he said was “out!” As in, of his high chair.

The experiment was over.

This new wave of fake-meat breakfast sandwiches symbolizes the very worst of both the plant-based product movement and fast-food.

Plant-based products are not plants. They are ultra-processed foods made, in part, with soy and peas and sunflower and mung beans, which, yes, are plants, but these products also contain a ton of additives.

The scientific community does not yet have enough evidence to support the idea that including more ultra-processed, plant-based foods in your diet can improve you health.

Or, as Ryan D. Andrews, R.D., a Connecticut plant-based-nutrition expert and author of A Guide to Plant Based Eating, put it in this article: “These kinds of meat analogs are recent inventions,” he says. “We don’t know the long-term health repercussions of regularly consuming them.”

To ring these fake meat breakfast sandwiches with a health halo, as plant-based product companies and fast-food comes do, is presumptive.

And it distracts from the fact that not one of these sandwiches includes an actual vegetable. Not a leaf of kale. Not a tangle of spinach. Not a circle of tomato. Not even a few specks of parsley for posterity’s sake.

Yes, you could side-order Starbucks’ “Seasonal Fruit Blend,” some apple slices at Burger King, or a—wait, hold up—the menu at Dunkin’ doesn’t offer any fruit or vegetable-based sides unless you count hash browns. But no one does these things.

Fast food is forgettable food, and if chains actually cared about your health, they’d put more plants on the menu instead of more plant-based foods.

And, in the process of adding real plants, they may even make their food taste better.

Even a toddler understands that.