I didn’t always used to be this way. I ran track and cross country in college, and had mandatory strength-training sessions several times a week (on top of daily three-hour practices). After college, I took up Pilates and yoga on top of my regular runs, and even had a six-pack at one point. And then came babies.

I eventually got to the point where I was happy to get any exercise in, so I’ve kind of fallen into a rut. In my mind, I’m still the semi-strong person I was pre-kids, but the reality is…I’m not. I also had a baby nine months ago, and it’s been on my mind that I needed to shake things up on the fitness front.

So, when I was asked to test out the Women’s Health 30-Day Fitness Challenge, I was game. I needed a strength training butt-kicking, and the challenge gave me four different workouts to do a week. There was one for upper body, one for lower body, one for core, and another for total-body, in addition to cross-training of my choice. Here’s the breakdown: 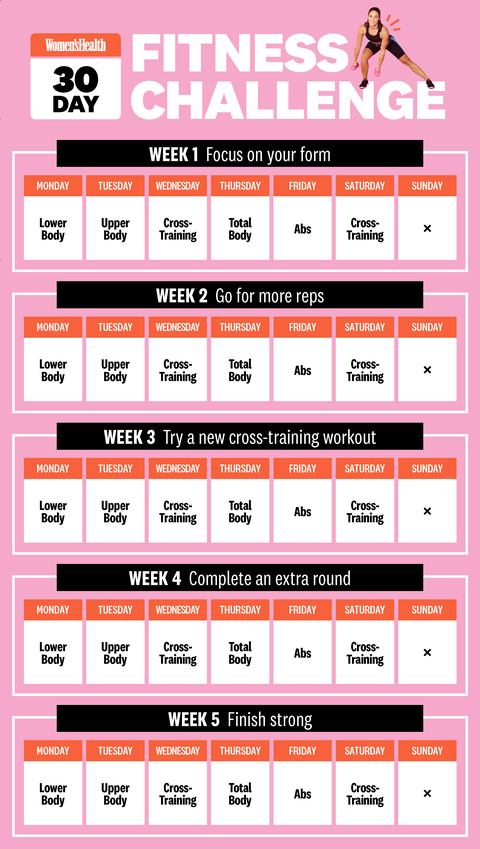 Each workout takes about 20 minutes to do and, here’s the best part: I could do it at home. With three young kids, it’s hard for me to find time to do anything other than run, where I can throw them all into a stroller and just go. I don’t even belong to a gym, because #notime. But having set workouts that I could do at my place when the little ones went to bed seemed doable. So, I went for it.

It quickly became clear to me that, while I’m in great shape for running, I totally suck at everything else. Each workout for this week had four phases: a warm-up, two circuits, and either a cool down or group of core exercises. 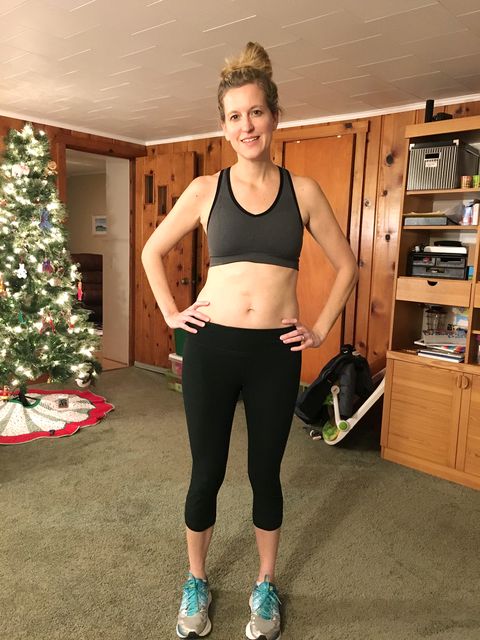 I’m not going to lie: I got cocky when I saw the warm-up for the first lower-body workout involved doing things like hip circles and side leg lifts for 30 seconds, but I was surprised that I actually got my heart rate up doing them. The pencil jumps in that workout also left me watching the clock to see when they’d be over.

As I suspected they might be, the upper-body and abs workouts were the hardest for me. And I quickly learned that tricep dips are ridiculously hard. I wanted to go all-in, but I kinda-sorta-totally cheated and tapped out early on those (I literally couldn’t do anymore!).

Plank jacks were hard and left me out of breath, but in a good way.

I felt pretty good with the total-body workout, except when I had to do pushup holds (which required me to do an actual pushup). I haven’t done a legit pushup since…ever. So that was a little tricky.

There were no weights this week since I focused on the bodyweight workouts, as the plan recommends—those came later.

By week two, I had a good understanding that this whole thing wasn’t going to be easy. Some muscle groups that I hadn’t used in ages felt sore—but I liked it. I felt like I was actually making some progress.

This week was basically a repeat of week one when it came to exercises. Tricep dips were still tough AF, but I did notice that I was able to make it through a full 45-second set this time around.

At the same time, the novelty of doing the exercises started to wear off, so I started listening to The Ben and Ashley I Almost Famous Podcast as a way to pass the time, catch up on my Bachelor news, and not obsess over the clock. I definitely found it was easier to get through everything that way.

Time to do the dumbbell workouts! TBH, by the end of week two, I was ready for this. I felt like I was getting comfortable with a lot of the exercises and it seemed like it was time to step things up a bit.

Although I was doing new workouts, I felt like the transition was pretty seamless. I went through the lower-body weighted workout with no problem.

The upper-body weighted workout was a different story, though. Once again, I got cocky. Given that I used to bench press 150 pounds when I was in college, I figured I could handle 15-pound weights for the glute bridge chest press with no problem. Yeah, no. My husband had a good laugh when I couldn’t even lift my arms off the ground for that one. So, I scaled down to 5-pound weights, which were much more manageable.

The Arnold presses sounded simple and seemed easy at the time, but my arms were definitely sore from them the next day.

I noticed at this point that my body didn’t look like it was changing, but I definitely felt stronger. 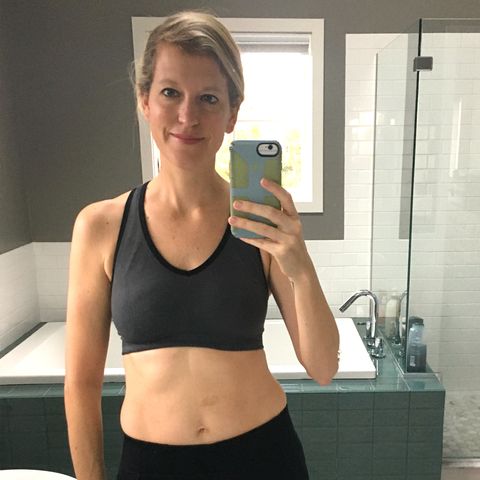 We moved to a new house during this time, and I felt like I could lift boxes a lot more easily than I could before.

This was it! I wanted to push myself to end on a high note, and I felt like I pulled it off.

I started adding weights to exercises that didn’t call for them, like Arnold presses and lateral squats, just to try to make things a little tougher. And I finally managed to pull off the glute bridge chest press with 15-pound weights—and get through two sets of 45 seconds with them.

While the leg workouts were more doable for me throughout the challenge, the upper-body and core workouts also started to feel easier to the point where I borrowed a heavier set of weights. I wasn’t quite ready to use 20-pound weights for the glute bridge chest press, but I felt fine using them for the sumo deadlifts.

Most of the exercises called for 45-second reps, but during the final week, I increased the time to a minute. It was only 15 seconds, but I found that it pushed me a little more.

I’m really, really glad I did this. I knew I was in a fitness rut, but it was a real wakeup call to see how much I was neglecting muscle groups that I don’t use to run or lift my baby.

I don’t think the appearance of my body changed a ton during the challenge, but to be fair, I did it during the holidays when I tend to bake (and, you know, eat) a lot more than usual. Still, I ended feeling a lot stronger than I did at the beginning. And, while I still might not be amazing at doing pushups, I at least feel like I can do five or so without embarrassing myself. 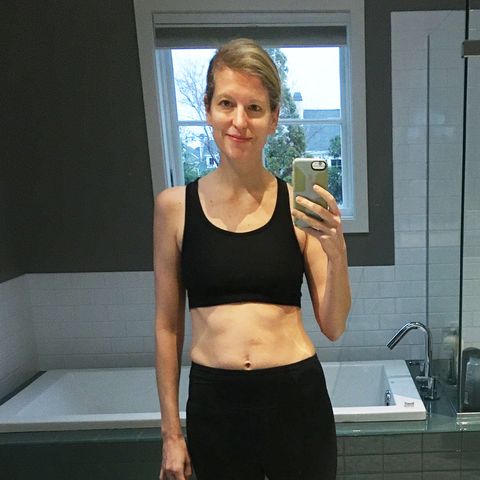 I’m going to hold onto the exercises from the challenge and try to do them at least a few times a week, in addition to my regular runs—especially the tricep dips. I’m not done with them yet.

It was hard to make time for the challenge between work, holiday stuff, a move, and the kids, and, honestly, there were a few times where I had to use my 15-pound baby as a weight to help keep her occupied and happy when she wouldn’t go to bed on time.

But I found that I looked forward to having some set time where I focused on myself and knew that I was getting stronger in the process. I like this new path that I’m on, and I want to keep pushing forward.

Sweat with us! The Women’s Health 30-day challenge kicks off on January 6th, 2020. Join our Facebook group to receive daily reminders, non-stop motivation, and support from other women tackling the 30-day challenge.