Sweets and the keto diet don’t exactly go hand-in-hand. After all, if you can only eat 30 grams of carbs a day — as much as you’d get from one cup of Honey Nut Cheerios — then you might assume that dessert is pretty much out of the question.

It turns out, many of the keto desserts you see on Instagram share a secret ingredient: erythritol.

Erythritol is a sugar alcohol, and it’s used as a replacement for sugar. Sugar alcohols are actually carbohydrates, according to the FDA. In addition to sweetening, sugar alcohols can add bulk and texture to products, help retain moisture, and prevent browning, per the FDA.

Erythritol is about 60 to 80 percent as sweet as regular sugar, according to the International Food Information Council. Calorie-wise, it has about zero to 0.2 calories per gram, while sugar has four calories per gram. Other sugar alcohols include xylitol and sorbitol, which are similar to erythritol except they have 2.4 and 2.6 calories per gram, respectively.

You’ll find erythritol in lots of low-cal and low-sugar packaged foods and drinks (think Halo Top and Quest Bars), says Torey Armul, R.D, a spokesperson of the American Academy of Nutrition and Dietetics.

Yes, Erythritol Is a Carbohydrate

That being said, the carbohydrates in erythritol won’t impact your overall carb intake. That’s because sugar alcohols like erythritol aren’t absorbed by the body, according to the International Food Information Council.

Most people on low-carb diets focus on counting net carbs, which are calculated by subtracting a product’s fiber and sugar alcohols from the total carbohydrate number on the label. The thinking is that there’s no sense in counting the stuff that your body doesn’t end up fully digesting.

So even though there are roughly four grams of carbs per teaspoon of erythritol, its net carb count is zero.

How Is Erythritol Different From Other Sweeteners?

Are There Health Benefits of Erythritol?

Erythritol does not have any health benefits per se, but when used as a substitute, it may help reduce calories and added sugar in a person’s diet, says Armul. That’s because, like other synthetic sugar substitutes, erythritol doesn’t raise your blood sugar — and that blood sugar spike (and subsequent crash) can lead to cravings and weight gain. Erythritol and other sugar alcohols also do not cause cavities, according to the FDA.

But keep in mind: When you look at the label of powdered or granulated erythritol, you just see a whole lot of zeros — no vitamins, minerals, protein, fiber, anything. So don’t look for erythritol to do anything for you besides sweeten your coffee sans calories and carbs.

Can’t Artificial Sweeteners Give Me Cancer?

Don’t freak out: A study from the science journal Food and Chemical Toxicology found no link between erythritol consumption and carcinogenic or cardiovascular risks. The FDA has not set a daily limit or recommended daily amount, and Armul says artificial sweeteners in general are relatively safe to eat in large amounts.

But as with any sugar alcohol or non-nutritive sweetener, it’s important to use erythritol in moderation as part of a healthy, balanced diet, Armul says. “[Alternative] sweeteners can help people cut down on the amount of added sugars in their diets,” she says, “but it shouldn’t be an open invitation to load up on low-calorie or calorie-free foods, which tend to be low in other nutrients, as well.”

What Are Erythritol Side Effects?

People with sensitive stomachs, beware: Sugar alcohols like erythritol can cause gastrointestinal upset due to their lack of digestibility, Armul says. If you have irritable bowel syndrome, you may want to limit it to small amounts or avoid it altogether.

For the normal consumer, you have to be eating a LOT of erythritol to experience these effects — like, more than 30 grams a day, according to this study from the European Journal of Clinical Nutrition. If you’re worried about the above-mentioned gassy side effects, the study recommends sticking to roughly 10 to 15 grams per day.

Check the label on your favorite low-cal snack to get a sense of how much sugar alcohol it contains. According to the FDA, manufacturers can voluntarily list a product’s sugar alcohol count on the nutrition label. It’s not required in most cases (unless the product is making health claims related to sugar alcohols), so you won’t see it on every food that has erythritol on its ingredients list. If it’s included, you’ll find it listed underneath the total carbohydrate count. 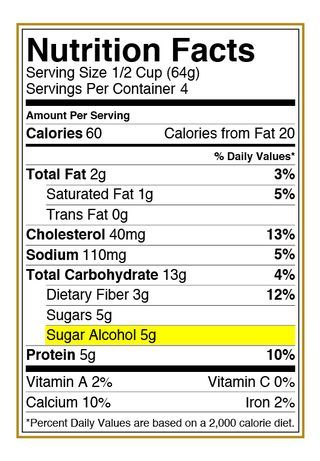 If you don’t see it, read the ingredient list to see how soon it appears. If it’s one of the first ingredients mentioned, there’s likely a decent amount of it per serving—so don’t go overboard. Your tum will thank you.

How Do You Use Erythritol?

As mentioned above, erythritol already comes in a lot of low-calorie, low-sugar foods. But you can also buy powdered or granulated erythritol and use it in your cooking or stir into your coffee.

One major word of warning: You can’t use the same amount of erythritol as you’d use of sugar. In most cases, one and one-third cups of erythritol is equal to one cup of sugar. Before baking with it, adjust the amount of ingredients in your recipe (and it doesn’t hurt to double-check the recommended conversion rates on the packaging of your erythritol).

“There’s no need to add erythritol or other sweeteners to your diet intentionally, as whole foods have more nutritional benefits,” says Armul. “However, for someone looking to replace added sugar in their diet, erythritol may be one of the better sweetener options on the market.”

via Erythritol Side Effects